The last harbour to harbour swim was organised by the Pondmaster, money was raised for various charities by means of sponsorship money.

By the mid 80's the pipe from the sea had cracked in various places and was patched.

A new springboard was donated privately to replace an old wooden springboard which had seen better years. Transport was provided by a local
businessman and was collected from the donor with a little help from some locals (as the council wouldn't provide transport to collect the
springboard).

This particular season saw the pool open for a few days only at the start of June. It was closed for most of June due to the sea water being
cloudy, since then the pool has been filled with fresh water from a fire hydrant at the front of the pool. 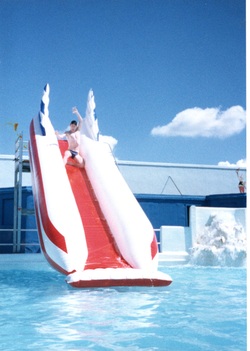 In 1989 the council installed an Inflatable chute at the pool