2000's
Nothing really remains of the Pond Hall Site. Housing and a Day Centre were built on the site 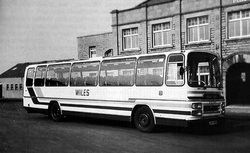 On hot summer days queues could be seen at the Pond Entrance, but these days have gone.

There is nothing now to attract people to stop, except the Public Convenience !!

Even the Promenade, once busy with tourists during the summer is "almost deserted", despite having one of the East of Scotland's busiest holiday Sites on its doorstep - Seton Sands
A community centre was built in the Local park......"Best in the Country" was the words of one local Councillor at at the time.
The majority of the funding didn't come from the local council. The hall isn't suitable for any indoor sports.

In February 2012, East Lothian Council announced plans for a new sports in Port Seton.....Ironic when one of the proposals in 1988 had a sports hall. Even this has been postponed (2013)
Di Ciacca's, Wiles Buses and the Pond were common household names in  the Village, all gone, but still bring back great memories too many locals...
cockenzie and port seton pond